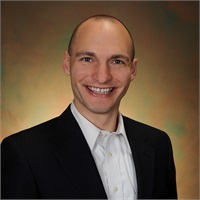 Dusty joined Spencer Financial Services in 2014, after seven years with the Federal Reserve Bank of Kansas City. He was promoted into the Management Development Program with his final position as an Assistant Manager. He received his Undergraduate Degree in Business Administration from William Jewell College. While there, he was named to both the Men's All-American and Academic All-American Soccer teams. Dusty was the first to make both All-American teams in Men's soccer at the school. Upon graduating from Jewell, he went on to receive his Masters in Business Administration from Rockhurst University.

Dusty enjoys being a part of his community by participating in many service opportunities. He has volunteered for "Teach Children to Save Day", RealityU/Future Now:Finance, Liberty Middle School Shadow Day, and Liberty Academy Project, as well as mentored students at William Jewell College and served as a guest speaker for personal finance students in the Liberty School District. He has a passion for providing a good financial foundation for children, teens, and young adults. While in college, he assisted with coaching the William Jewell College soccer camps. He also participated as a Salvation Army bell ringer during the holidays and cleaned an Adopt-A-Highway with his fraternity, Phi Gamma Delta.

Dusty is married to Stevie, and they have four children, Dalton, Caden, Braxton, and Abrianna. Dusty loves spending time with his family, supporting local sports teams, and developing his kids' love of sports and dedication to their activities.