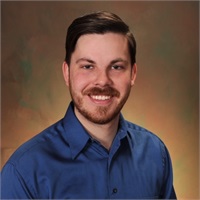 Josh joined Spencer Financial Services in 2019, after eighteen months with BankLiberty. While there, he held two positions with the latter as a Customer Connect Specialist, in which he was handpicked for the newly developed department. Josh was greatly involved in customer service, servicing accounts, and creative problem solving within the bank. He received his Undergraduate Degree in Financial Management from Northwest Missouri State University, the same alma mater of his parents. In his time there, he served through Campus Crusade for Christ, in which he held multiple leadership roles.

Josh and his wife, Jodie, met in college and have been married since June 2016. His interests include working with his hands, primarily in woodworking, and traveling with family to camp, hike, and be outdoors. Josh is also an avid sports fan and follows the Chiefs closely. In his spare time, he enjoys running, most recently completing the Kansas City and Hospital Hill Half-Marathons.